skip to main | skip to sidebar

A Car Wash at the ‘Dump’

I've mentioned before that one of the things our park, South Park, was known and used for was the local dump. This was true, but appears to be no more. Besides the chronically bad case of littering our community seems to have there were about ten dumpsters that were placed across the street from us and took over a parking lot there. Late at night, various neighbors would bring truck load after truck load of garbage and it would be piled sky high and overflow into the surrounding pavement and grassy field.

Both in our private and family times with God we’ve been inspired to pray along the lines of Jeremiah 29:7a that says, “…seek the peace and prosperity of the city…” While we pray this verse for our city we see ahead into the future as our community is transformed from a place of violence and despair to a place where people desire to come, where the true beauty of the people is able to come out and in turn be reflected in the parks, homes, schools, businesses and churches of this community.

Though we prayed about the parking lot that had become a mass dumping ground we hadn’t yet mobilized to speak with the park bureau or city commissioner, but then one day the city came and took away all of the dumpsters and masses of garbage all around them. 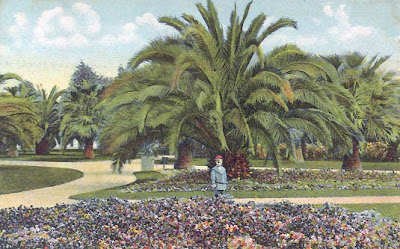 An illustration of South Park in its early days, Circa 1905 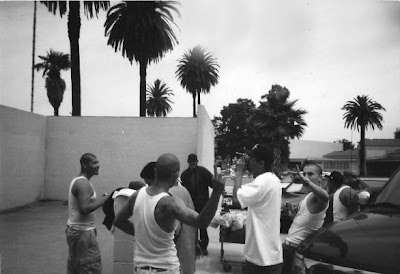 East Side Playboys gang members congregate at South Park just a stone’s throw from where we have our Sunday outreaches. We are believing God for the peace and prosperity of this area.

Within a week the local gang, the East Side Playboys, gathered in mass in that area and held a car wash to raise funds for the family of a member who had been shot the day before. Fabiola felt that we needed to go out and find out more about what had happened. She went out and gave a small donation to one of the ladies standing in the middle of the street just one house over from ours and found out more information. Upon returning we felt pressed to go and offer our consolation, prayers and neighborly friendship (besides we did need a car wash). 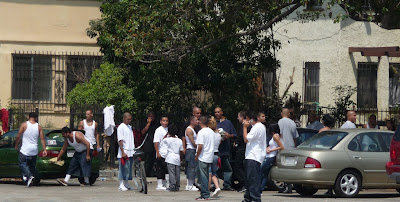 Taking care of their own. Gathered at the west parking lot of South Park (the old dump site) East Side Playboy members came together in the largest public gathering we’ve ever seen to raise money for the slain members’ family. There were 50-100 members congregated throughout the day…stopping traffic to ask for money, washing cars and selling food. It was a peaceful day.

I was a bit intimidated at first, but God showed us something powerful in our obedience to cross the street and enter into their world. We enjoyed our time and were able to introduce ourselves as their neighbors and let them know that we were here to bring peace in the community. They were polite, respectful, humble, well organized and unified. Our kids played with their kids and made the stone- hard stares of the ladies melt into laughs. We joked with the guys and felt honored to have our car washed by God’s future leaders. Please pray that we’d make a connection with key members and be able to see a breakthrough as they become part of the Church. Much of what we saw that day helped us get a glimpse of how the early church in Acts functioned—yet missing such an essential element, the reason, motivator and enabler: Jesus. Wouldn’t it be beautiful to see these heavily tattooed and battered-by-life children of God worshiping unabandonedly their creator out in the middle of South Park—their ‘hood, their community! 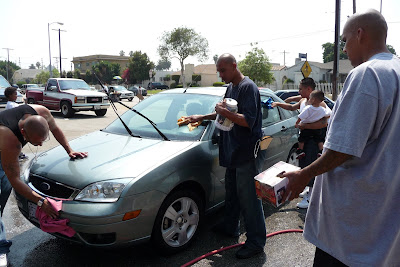 Building relationships, trust and being part of the community. Local gang members wash our car (our house is the brownish two-story house in the background)—they did a great job! 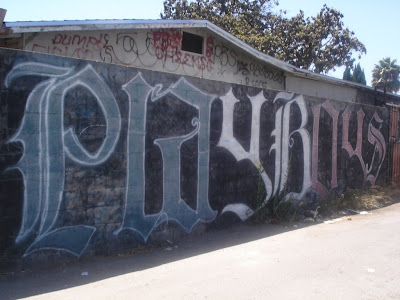 The Playboys (PBS) were started in Los Angeles in the early 1960s that started as a car club and then became a full-fledged gang. Out of all the South Central gangs, the East Side Playboys have the third largest territory and the fourth largest membership. The Playboys are one of the most active gangs in Los Angeles and are known for many murders of their rivals in past decades; currently they are ranked number twenty on the top twenty list of most dangerous gangs.

Article from the Los Angeles Times:

Los Angeles Police Department Officer Rosario Herrera said Jimenez was a gang member who was standing in an alley about 3:55 a.m. with a female acquaintance when two men, also believed to be gang members, approached and started firing.

The victim suffered wounds to his upper and lower torso and was rushed to a hospital, where he was pronounced dead. 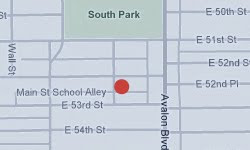 This map shows the location of the shooting of Mauricio (the red dot), our house is located on the west end of the park at 50th Street, just a few blocks NW from the murder.

Not everybody has been happy about the clean up or the presence of the ES Playboys en masse. Rival gang activity has been on an increase. I also overheard one homeless man mumble to himself colorful complaints against the city that took his vast source of ‘resources’ away from him. The arrival of God’s peace and prosperity in the city does not come through a city clean up, nor in providing financial assistance and jobs for the poor. Peace isn’t even a lack of street or domestic violence. The issue is much deeper, one requiring God’s sovereign move and God’s instrument the Church to see a restoration of health on all levels—mental health, family/relational health, physical and emotional health and of course spiritual health. Believe with us this month for healing, for health…for continued peace, cleanliness and provision for the people here in South Central.

For His treasures locked in bondage, 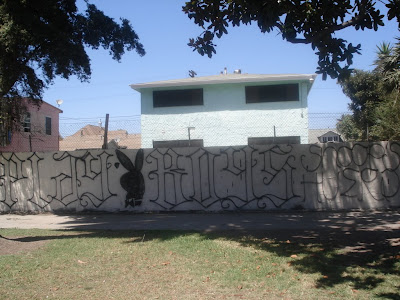 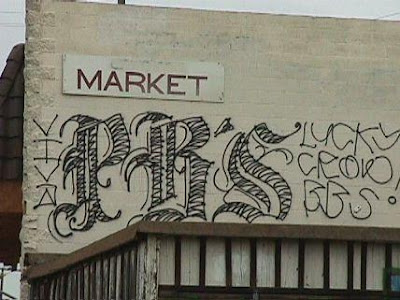 (We’re taking this territory for Jesus!)

This year instead of preparing for another school year as I have done for the last 11 years, Fabiola and I are laying the foundation for a new church that is going to be launched in our community early 2010.

We are thankful for our home; living where we live has placed us at ground zero. We are living in a place surrounded by needs. Our park, South Park, is a true ‘multi-use’ park. There are joggers in the mornings, soccer and basketball games almost non-stop, the homeless live there, the gang members have claimed different corners, families’ picnic or barbeque, venders sell candies, snow cones and balloons, and children run around and play. There is something for just about everyone. We host the local ‘dump’, the local day care, the local aerobics class, the local pool and a baseball field used by pee wee football leagues and adult baseball teams. What an exciting place to live!

Our front meeting room (family room) and our large front porch have great views of this park…views that have spurred prayer and action. The other day Fabiola decided to go serve a family with eight children who live in the park during the day and their van at night. This picture shows Fabiola and Rebecca serving this family cookies and lemonade in their ‘family room’. Fabiola has since been able to continue visiting this family in their various ‘camps’ and pray with them. 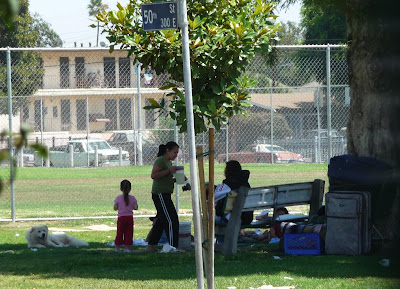 On that first visit our daughter, Rebecca, asked, “Why are we giving them lemonade?” Fabiola responded, “Because they don’t have a home and are out in the hot sun and probably thirsty; it is what God wants us to do.” Then Rebecca responded, “But why don’t they have a home Mommy?” She wasn’t able to fully respond to our 3-year-old’s question, but in this short time here we are blessed to see how powerful it is for the whole family as we minister together, side-by-side.

Sunday afternoons we participate in two outreaches at the park. The first is providing both spiritual and physical food to the homeless. Mostly men arrive in all different states of need and we are able to be like Christ to them. In the second outreach children are invited to come and be taught about Jesus and the Bible through a VBS-style church service. Every week brings a different group and a different challenge, but one thing Fabiola and I are working at is getting to know not only the children, but really reach out to the parents that are watching from a distance at the edges of our activities. We are keeping our eyes and ears open as we bring the word and deeds of Jesus to our neighborhood as to whom the first disciples of this new church will be. 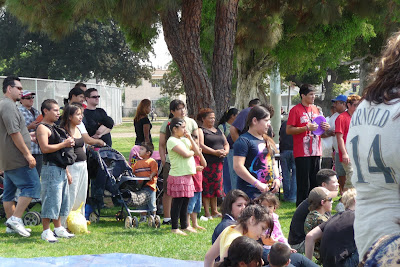 Thanks you for helping us lay a foundation for this new work here in South Central Los Angeles through your prayers, encouragement and financial support.
Posted by heart 4 the city at 2:01 PM No comments:

heart 4 the city
The Wolyns are dedicated to minister as a family the love, hope, peace and justice of Jesus to the city. Please pray for them.

It would be a huge blessing if you joined our financial support team. If you feel led to support this ministry you can do so online at www.worldimpactwest.com/wolyn.